I am Giorgia, I am a Woman, I am a Mother, I am a Fascist 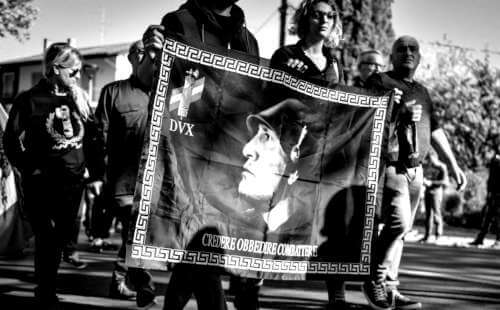 When Giorgia Meloni in the election campaign renewed her battle cry "I am Giorgia, I am a woman .... she omitted to say" ... I am a fascist "

When Giorgia Meloni in the election campaign renewed her battle cry "I am Giorgia, I am a woman, I am a mother .... she omitted to say I am a fascist.
He would have liked to declare it, if he had followed his heart he would have done so, but obvious reasons of political expediency have advised him against it.
After winning the elections - with the approval of all the resigned in Italy - Giorgia Meloni began to no longer be afraid to show herself for what she really is, sure of having everyone at her feet or quite submissive.
Giorgia immediately began to take off Donna's shoes.
There are hardly any women in his government and those few sneaked in - toll booths santanchè?! - they don't claim their gender membership that much.
They only thought about having children (ministry of the birth rate), as in the good times!
Then Giorgia, after the grueling efforts to parcel out even the sidewalks of Montecitorio, was assailed by memories, she felt a surge of nostalgia thinking back to the times when she was forced to hold carbonare meetings in missine offices, or to watch the demonstrations of the "leftists" from behind the helmets of the cops, urging them in his heart to bat harder.
For this reason he immediately gave orders to Piantedosi Salvini: if more than ten students were to be grouped at the University of Rome, beat them immediately, so I rejuvenate.
And so Giorgia has forgotten that a student usually has a mother who is still alive, who worries and grieves if someone harms her children, whatever their political beliefs.
Even removing the clothes of the Mother, Giorgia immediately showed what she is made of when it comes to "putting an end to the laxity" of the left, especially with immigrants and ravists, the new barbarians who put the safety of respectable Italians at risk.
The Modena Rave had just begun that the anti-Rave decree was already ready. It was in a Piantedosi Salvini drawer waiting for the first opportunity. Six years in prison for anyone who organizes or participates in gatherings of fifty or more people, disturbing the public peace.
It will not be necessary to occupy a dilapidated and abandoned building, a school (even those are dilapidated) or a square will suffice, even without music, public peace is disturbed with subversive slogans.

Those of Predappio were more than 50 and like every year they went to commemorate, freely and without restraint, the memory of the Duce Benito Mussolini, with Roman greetings and old songs from the 20s of the twentieth century.
They have been doing this for a long time, without anyone having arrested or beaten them. They are fascist followers to whom the democratic system grants freedom of expression, despite the anti-fascist origin of the Italian Republic and the rules of the penal code against the apology and the reconstitution of the fascist party.
This year the Predappio meeting took place within the framework of the first far-right government chaired by Io Sono Giorgia, a former far-right militant, and the hundredth anniversary of the Blackshirt March on Rome, antechamber of the seizure of power by by Mussolini.
For the occasion, a journalist asked Giorgia Meloni what she thought of the nostalgic fascists and she replied that the Predappio demonstration "is politically distant from me in a very significant way".
Ambiguous, indeed explicit phrase, which says a lot about Giorgia Meloni's chameleonism and the unscrupulous use of winks to the far right.
Giorgia did not define those of Predappio as "4 nostalgic imbeciles", she did not criticize their phrasebook, gesticulations and the exaltation of the policies implemented during the Fascist period.
He only said that they are "distant from me", like lovers who for some reason are forced to live distant but always faithful in their hearts, waiting to find themselves close one day.
"Distant from me in a very significant way" is a phrase that does not express any condemnation or criticism of the ideology of the predappists. On the contrary.
It reveals a commonality, a possible future rapprochement, an indestructible belonging. Giorgia Meloni's fascist conviction is explicit. Which could legitimately declare it, without double games or without bothering women and mothers. "I'm Giorgia, I'm a fascist", period, it would have been better to know sooner rather than later. It is braver and more feminine.

from Repubblica of 11/2/2022 - Interview with Zerocalcare
....
Giorgia Meloni and anti-fascism. Forgetting Gobetti and Calamandrei, for the premier anti-fascism is only the one with the wrench. Why does he tell it like this?
"Because it is his story. Meloni's is a political community which, beyond the way it poses in front of the cameras, is in full continuity with the neo-fascism of the seventies. Once I reach the end of the crossing, it doesn't surprise me that take your pebbles off your shoes. It's the usual victimhood. They tell the story as it suits them, forgetting that, in those years, the neo-fascists planted bombs on trains and in stations in agreement with the secret services ".

Have they returned to before Fini, denying Fiuggi?
"It does not seem to me that there is this vocation to overcome fascism. It seems to me instead that some words spoken in these days have been reassuring only for those who wanted to feel reassured. The truth is that the linguistic code is always the same, without cesura ... The sovereign nation, the patriots .... It is a political community, I repeat, that will not give a nail on this. Besides, it has no reason to do so, since no one asks it ".

Your personal exhibition opens at the Fabbrica del Vapore in Milan on December 15th. "After the bang" is the title. In the poster we see an asteroid hitting the city, a metaphor for Covid. What has changed?
"The pandemic has also had a dramatic impact on social networks, political networks and even affective ones. It was an extremely divided event and we are still stuck there. It is impossible to reason, I also notice it in my live events when someone raises the theme".

Why is it impossible to mend this fracture?
"I don't know, maybe it has to do with the fact that people, locked up at home, have formed their opinion on social media. And this has led to a sort of jihad between" accomplices of the dictatorship "and" virus spreaders. ". The lacerations are very deep. In the exhibition there is my life of these years, there is the conflict. And, of course, there is also a reflection of this".

Michele, are you afraid today?
"I am white, I am male and I am one of the privileged. It would be ridiculous if I told you that I am afraid for me. But there are a whole series of subjectivities that have reason to worry. But not for this particular government. It is the country that has changed and this right-wing government is only the consequence ".

The Revolution of Women in Iran, Mahsa Amini and the Others

In Iran, the women's protest against the Khamenei regime does not stop, triggered by the brutal killing of Mahasa Amini and spread throughout the cities. A revolt that denounces other dictatorships and governments

"Less or more" is the option that presents itself in countless situations, in individual life as in social life, the alternative" escalation "or" de-escalation ". It seemed to me simpler" less more ", with the minus before the more.
www. menoopiu.it - ​​menoopiù blog - my opinions. This site is not a newspaper as it is updated without any periodicity.
It cannot therefore be considered an editorial product under the law no. 62 of 7/3/2001. "Menoopiu.it" supports the free and free dissemination of ideas, so all posts can be reproduced by remembering to mention the blog or insert a link to the original post.
Menoopiù blog - Copyright © 2022 - i.fantasiaATmenoopiu.it - ​​twitter: @ menoopiu - RSS - this site is made with Umbraco CMS 8.18.5 - Bulma CSS customized Theme - This site is running Umbraco CMS version 8.18.5