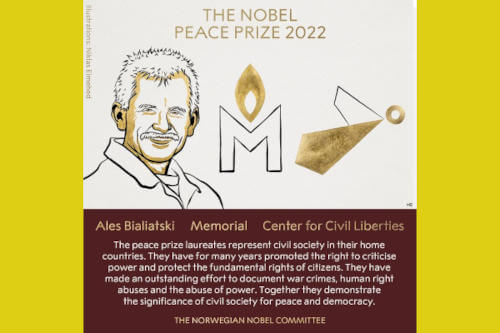 The Nobel Peace Prize was awarded to the Russian "Memorial", the Belarusian human rights activist Ales Byalyatsky and the Ukrainian "Center for Civil Liberties"

“They have made an outstanding effort to document war crimes, human rights abuses and the abuse of power. Together they demonstrate the significance of civil society for peace and democracy,” the head of the Norwegian Nobel Committee, Berit Reiss-Andersen, told reporters.

The committee stressed that its choice of prize recipients was not directed at Russian President Vladimir Putin, who launched an invasion of Ukraine in February and has overseen a sweeping crackdown on dissent in the months since.

Memorial, which was founded in 1987, is one of Russia’s oldest civil rights groups and was initially led by Soviet dissident Andrei Sakharov, also a Nobel Peace Prize laureate. T

The explosion on the Crimean Bridge, symbol of the Putin regime, takes place a few hours after Biden's warning about the imminence of a Nuclear Armageddon unleashed by Russia against Ukraine...

"Less or more" is the option that presents itself in countless situations, in individual life as in social life, the alternative" escalation "or" de-escalation ". It seemed to me simpler" less more ", with the minus before the more.
www. menoopiu.it - ​​menoopiù blog - my opinions. This site is not a newspaper as it is updated without any periodicity.
It cannot therefore be considered an editorial product under the law no. 62 of 7/3/2001. "Menoopiu.it" supports the free and free dissemination of ideas, so all posts can be reproduced by remembering to mention the blog or insert a link to the original post.
Menoopiù blog - Copyright © 2022 - i.fantasiaATmenoopiu.it - ​​twitter: @ menoopiu - RSS - this site is made with Umbraco CMS 8.18.5 - Bulma CSS customized Theme - This site is running Umbraco CMS version 8.18.5