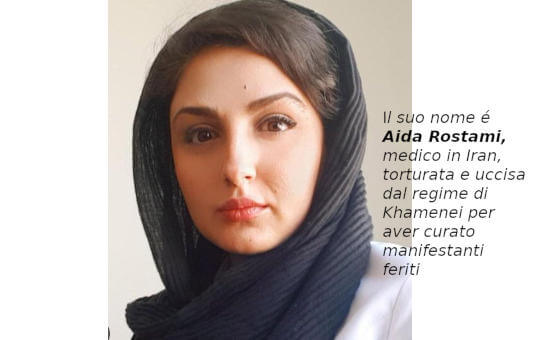 Her name is #AidaRostami, a doctor who helped injured protesters in Iran. On Dec 12, she left the hospital & never came back. The next day police told her family she had an accident. No one believes the lies of the regime. @UN_HRC investigate! #MahsaAmini #مهسا_امینی #آیدا_رستمی pic.twitter.com/TUnkKnF6fR

She was a doctor!

Before being killed, she was tortured. Her left eye was removed and her left hand was broken.

This is the true face the monster regime killing children, innocent demonstrators and doctors. pic.twitter.com/e2LhBirHnm

Iranians wounded by the security forces during the ongoing nationwide protests avoid treatment in the country’s increasingly unsafe hospitals for fear of being detained, tortured, prosecuted or killed.

The medics ready to brave the risks to help the injured are treating protesters in their offices, the demonstrators’ homes or elsewhere.

Aida Rostami, 36, was one of them. She was treating protesters in Ekbatan and other western neighborhoods of Tehran until she disappeared earlier this week. Her tortured body was handed over to her family a day later.

After taking care of several wounded protesters in Ekbatan on December 12, Rostami realized she was running out of some medical items such as sterile gas, a source close to the family told IranWire.

The doctor left a protester’s house to get the things she needed and was never seen alive again.

A local police station called the family the next morning, announcing that Rostami had died in a car crash overnight. They were told to pick up her body at a morgue.

The IranWire source said the car accident was "definitely" not the cause of her death.

"The medical examiner told her family that they were ordered not to reveal the true cause of Aida's death. They said that she did not die in a car accident, they killed her."

The security officers allowed the relatives to see the body, but only after they insisted.

"It is not possible that when you are driving and you get an accident, both of your hands would break, your lower torso gets bruised, and your eye completely comes out."

The family unsuccessfully requested the police to show them Rostami’s vehicle and the spot where the alleged car accident occurred.

Rostami was buried in Gorgan, where the family is originally from.

And Ekbatan lost another doctor.

"Less or more" is the option that presents itself in countless situations, in individual life as in social life, the alternative" escalation "or" de-escalation ". It seemed to me simpler" less more ", with the minus before the more.

www. menoopiu.it - ​​menoopiù blog - my opinions. This site is not a newspaper as it is updated without any periodicity.
It cannot therefore be considered an editorial product under the law no. 62 of 7/3/2001. "Menoopiu.it" supports the free and free dissemination of ideas, so all posts can be reproduced by remembering to mention the blog or insert a link to the original post.
Menoopiù blog - Copyright © 2022 - i.fantasiaATmenoopiu.it - ​​twitter: @ menoopiu - RSS - this site is made with Umbraco CMS 8.18.5 - Bulma CSS customized Theme - This site is running Umbraco CMS version 8.18.5